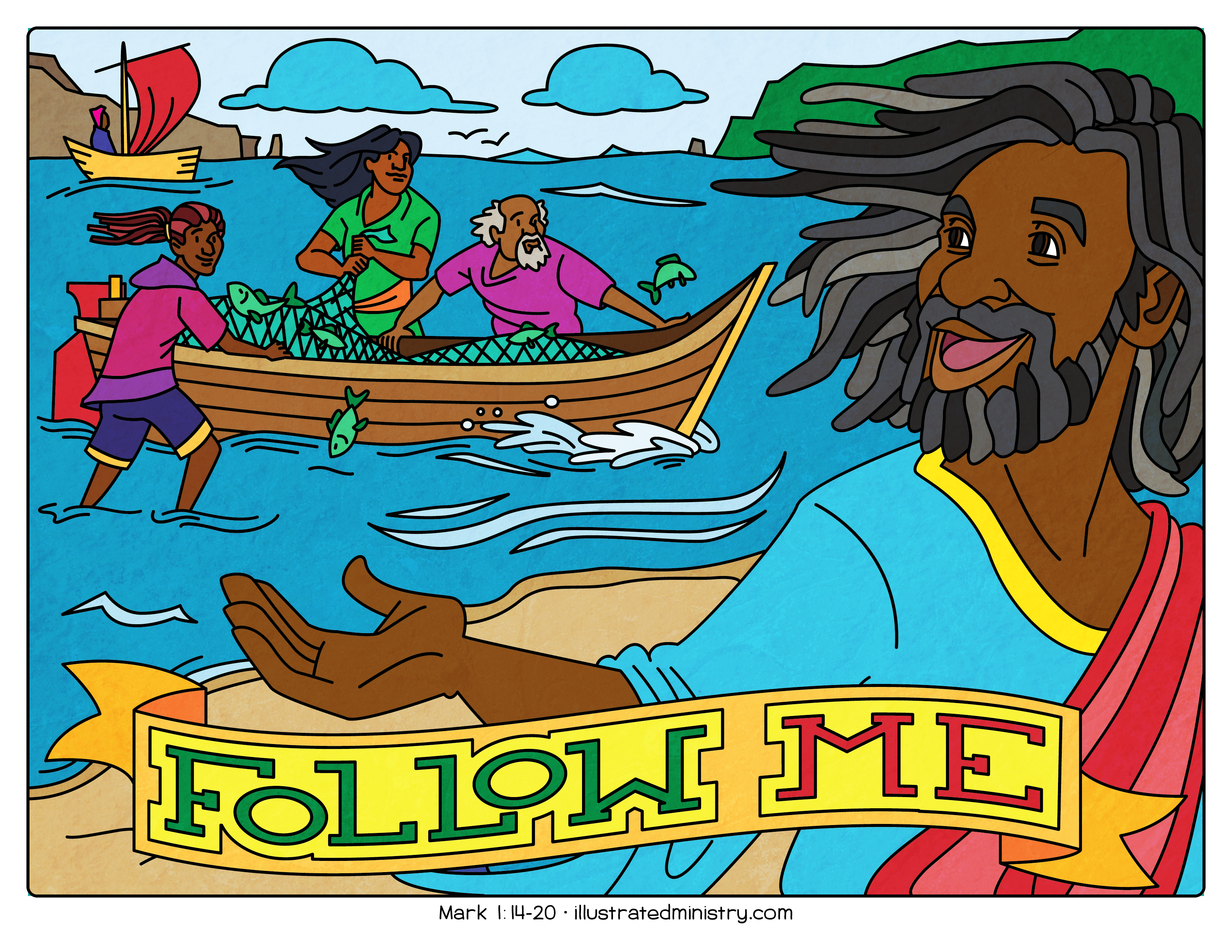 The first time we took our sons fishing was not a success. We were boating down the Rideau River lock system in our small wooden runabout for a story Erin was writing for the Canadian Geographic magazine. Samson was barely two, and Noah would have been about 5. We stopped at one of the locks, grabbed our rods and tossed in the lines. The first fish that came up was hooked through the eye. Noah immediately starting crying for the fish’s fate. We carefully unhooked him, threw him back in, as was always the plan, and fishing was put on the back burner for many years.

I was reminded of this story reading the gospel this week, where Jesus arrives on the shores of the Sea of Galilee and lures Simon and his brother Andrew away from their life as fisherman with the promise: I will make you fishers of people. It is the promise of a life of adventure and of grander purpose and meaning than their current situation. As we know, they accept.

What does that mean, to be fishers of people? Over the centuries, this phrase has come to be about evangelism, about “catching” people for the church. But is that what Jesus meant? I don’t recall Jesus ever counting the crowd the way the ushers do at church. I doubt very much, in fact, that Jesus would judge a church by the numbers on its rolls – as we like to do – rather than the good works they produce. In fact, Jesus said, “where two or three are gathered” the gospel is possible – a very argument against people counting. The church that Jesus imagined was not about “bums in the pews,” as we say; but “deeds in the world.”

So how then, do we fish for people? Perhaps we might compare it to how we catch fish – dangling an appealing object until they happen by and grab hold, then hook them and whip them out of their comfort zone, and decide their fate on their behalf. Do any one of us want to be caught that way? And yet, we try this all the time, often unconsciously: we decide what is “best” for certain people, we donate when we deem it fitting, we judge those who don’t accept the fate we have decided they merit. And if they choose to walk on by whatever “shiny object,” we deem it to be their fault.

I cannot imagine that Jesus ever thought his metaphor for fishing for people would refer to actually fishing. This is certainly not how he went about gathering people. How did he do it? He listened to them. He spoke with them. He shared ideas and debated. He healed them and fed them – he served them. His goal was not to yank them in on some divine fishing line, but to invite them into community. We have an excellent example in Simon and Andrew. Jesus didn’t shame them for being fishermen; He described an option, a choice, and he inspired them.

I often work on my sermons now on Wednesdays. Three Wednesdays ago, I was considering the gospel message while a violent crowd was smashing windows and beating police officers at the U.S. Capitol. This past Wednesday, as I wrote this, an old President was leaving and the new President was being sworn in.  Their differences are stark: indeed, the first sought to catch people with a hook of fear and shame, and the results are plain to see: an angry mob that hides that fear and shame behind hate.  The second took the podium after being sworn in and spoke of hope, tolerance and working together despite differences.

Surely we can learn from this in our own lives: which message pulls us down, and which one lifts our spirits and gives us energy? How are we to practice the same when we go about “fishing for people.”

The irony of the phrase is that Jesus didn’t fish traditionally for people at all; he didn’t catch them by way of a trap, or trick. The message of the gospel is not join us or else. How inspired are any of us by that kind of ultimatum? Though the church throughout history has often missed the point, the gospel is a message of freedom. And there is no trick: it’s all clearly spelled out upfront. Through the life, death, and resurrection we are given the gift of freedom and out of thankfulness for that gift we try to be people of hope, acceptance and charity, and because of that posture the world will be better, and life will be better. There’s no catch. That’s it.

We may listen to the soaring rhetoric of politicians, our own and elsewhere, and understandably be jaded. But there is a reason why we call those words, sentimental though they may be, soaring.  They rise above our material squabbles, our petty arguments, our tendency toward jealousy and bitterness, and they signify our aspirations to be better people, the kind that others respect, the kind that have purpose.

What a strange and trying month this has been, these first weeks of 2021. From our sidelines across the border, we have seen the worst of humanity, and then, this week, our amazing ability to use music and ritual and speeches to describe what we all universally desire– to live well and with meaning, freely and peacefully. It feels a bit like whiplash; and yet it is so human. On two separate Wednesdays, we have our cautionary tale: what will catch us – the fearful hook, or the welcoming hand? What will we use ourselves to fish for those around us?

“Come,” Jesus said to Andrew and Simon and to each one of us: [I will teach you how to fish for people. Put down your hook. And take my hand.]